Not On My Watch #7 – Child Sex Trafficking 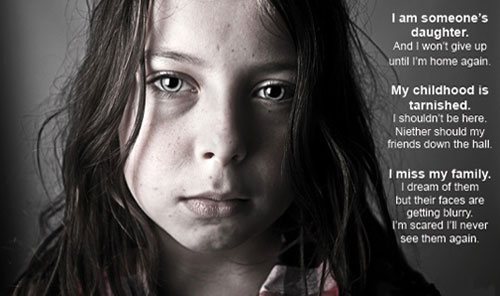 Not On My Watch #7 – Child Sex Trafficking

It has come to my shocking attention that sex trafficking among our Nation’s youth is epidemic. In my many years in Law Enforcement, I never realized that children were being recruited and forced in the sex trade right here in America. I was appalled and thought that there must be a way to get involved. I needed to understand what this was about. I needed to educate myself and find the resources that would provide me with this information. I admitted that I knew basically nothing about child sex trafficking and in order for me to help put a stop to this, I needed to talk to the experts, I needed to learn what they knew.

I have had requests to write on this subject for the last few months. I told my readers that I would write my blog as soon as I was comfortable with the information and that I could write about it with some sort of knowledge. I am surely not an expert on the subject but I know that I need to advise my readers on the information that I have learned so far into my research.

What is Sex Trafficking? The Federal Trafficking Victims Protection Act defines the crime of human trafficking as:

The recruitment, harboring, transportation, provision, or obtaining of a person for the purpose of a commercial sex act where such an act is induced by force, fraud, or coercion, or in which the person induced to perform such act has not attained 18 years of age.

The age of the victim is the critical issue, there is no requirement to prove force, fraud, or coercion was used to secure the victim’s actions. The law recognizes the effect of psychological manipulation by the trafficker, as well as the effect of threat of harm which traffickers/pimps use to maintain control over their young victims.

Now that we have all the legalese out and defined, we can start talking about the Who, What, Where, Why, and Hows.

Who are the victims of Domestic Minor Sex Trafficking? Kids are especially susceptible to the deception and manipulation of traffickers. Traffickers recruit at locations that commonly attract youth, like schools, malls, parks, protective shelters,and group homes. Over 1.68 million American kids run away each year and become targets for traffickers. About 85% of DMST victims have experienced contact with the child welfare system, according to a New York Study. Boys and girls can be victims and the number one factor of vulnerability is the child’s age.

Human trafficking in the U.S. is a $9.8 Billion industry. At least 100,000 US children are exploited in prostitution every year in America. Thirteen years old is the average age a child is first exploited through prostitution. The traffickers are called pimps and more than 90% of victims are under the control of a pimp. Pimps commonly sell girls for $400.00 an hour or more. I have seen the research indicating that the majority of pimps control about 1-5 girls and can sell the girls several times a day. This has become more profitable than selling drugs.

We need to protect our children, It can, has and will happen in our backyard. We are not immune to this. There will be a time when you read about a girl in town that you knew has been a victim of DMST, Domestic Minor Sex Trafficking. That the last time someone saw her was right after work in a local diner. Where did she go? Did she run away? Did someone abduct her? Why would she take off she had a great family life? She met a guy online. She is on her way to Phoenix to model. Bright lights Big city, money, fame. She ended up a sex slave, the promise never came. The nice guy lied to her.

We must emphasize prevention as the first priority. We must be pro-active. Parents, schools, child advocacy organizations, and youth groups need to work together in developing and disseminating messages related to the protection of children from sexual exploitation. Public media, especially television networks and the movie and music industry share a huge responsibility for distributing material with messages of Child Sexual Exploitation in our society. Together we need to come together as a society that treats our children with care. If not us then they will end up under the control of someone else, someone that I only briefly described above. If there is only one thing I can do, it is to educate and try to prevent this from happening. Then, maybe a child has a chance On My Watch.